My Beloved World by Sonia Sotomayor

View all my reviews

Too bad Paul McCarney didn’t make it to a Harmony Project Rehearsal. Tonight, we had a guest choir straight from Israel

The Galron choir performed a peace, Lyhi which is the Hebrew version of “Let it be.”

We have professional musicians at the Harmony project and they know their music. They were all listening, and had enthusiastic looks on their faces. I think they were surprised at how much the piece touched them.

David Brown, the leader of the Harmony Project, took an opportunity to bring the choirs together. We all sang parts of ” Let it Be” with the choir, and put our hands in the air.

In his after rehearsal letter, David said,” Now you see how music unites.”

Maybe the world leaders should all take up singing or playing an instrument. 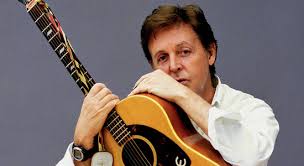 Happy 71st Birthday Paul McCartney!  I remember sitting in my parent’s bedroom and seeing The Beatles make their U.S. debut on the Ed Sullivan show on a little black and white TV, a Philco, I think. It was on my birthday, in 1964 and I just turned 11 years old. We couldn’t get over the girls screaming and crying. The Beatles composed many beautiful songs, some fun songs, some intriguing and thought-provoking songs and were humble enough to thank many of the great rhythm and blues and black rock and roll musicians that came before who influenced them. Such influences included: Chuck Berry and Little Richard.

“The impact of the Beatles – not only on rock & roll but on Western culture – is simply incalculable. As musicians, they proved that rock & roll could embrace a limitless variety of harmonies, structures and sounds; virtually every…

Last night I watched the show, “Homeless in America.” It was about the working poor who were living in a hotel in Orange County, California. It focused on the family’s children.

The families they focused on had jobs: one lady worked as a nurses aid, one guy worked at Target, and other jobs working from 9-12.00 an hour. They were the working poor.

This hotel wasn’t the best environment for the kids. They could tell you in detail who was taking drugs, and why the police were coming. It was sad that such little kids were so worldly.

The documentary showed how these kids had to share spare living quarters with their families. They had to keep their clothes in crowded spaces. (One family had 4 little dogs living with them. This made no sense. Why would she be feeding dogs when her kids were in such need? Never owned a dog, I don’t quite get it.)

The rest of the people were really trying to stress values. I thought one mother was way too END_OF_DOCUMENT_TOKEN_TO_BE_REPLACED

Cover of The Story of Anne Frank

Anne was a young, Jewish girl who was forced to hide away with her family in Amsterdam,Holland. It happened during the Holocaust during World War II. The family found a hiding place above a factory, and successfully hid there for several years. Tragically, someone turned them in, and were ultimately captured by the Nazis.

Anne’s father survived, and went back and found her diary. It was later published and has been read by thousands. Why am I giving out these details? I’m thinking less and fewer people know about this diary. They used to teach it in high schools, but I”m wondering how true that is today. Can the young people of today relate to the words written by a young girl in the 1940’s?

It’s more real to me because I am going to be 63 years old. When I was born in 1950, the War had only been over for five years. It seemed very real to me. When I found out about this tragedy, it upset me. To think people would kill others because of their religion. Since that time, I’ve read hundreds of books about it, and heard survivor’s talk about it. I’ve accepted it, but it still makes me very sad.

In the early 70’s, I took a trip to Amsterdam and got a chance to walk through the hiding place that is now a museum. The space was so small. I wondered how 3 families could have survived there for so long. I looked out the window at the very same tree Anne longingly looked at from her hiding place. I was touched by the pictures of American movie stars of the 40’s that she had taped on the wall.

In her diary Anne stated that “I still believe people are really good at heart.” One wonders if she still believed this by the time she died, and directly experienced such cruelty. How did she feel when she got off the train at the concentration camp and realized people were starving and broken? What did she think when she saw the stacks of the gas chambers that killed her peers, neighbors, loved ones, and fellow Jews? (It wasn’t only Jews that died.) This all happened in a civilized society too. It’s very frightening.

How tragic it was that someone with such insight and talent died so young. She was never to know that millions would read her words. If it was a fictional story, she would have survived. Sadly, it was a real story; perhaps, she went to a better place. Who knows?

The real tragedy is that people’s cruelty to each other hasn’t ended. It continues. It’s been going on since the beginning of time. Somehow, good does win over evil. It takes a while, but it seems to happen.

The best we can now do is think about Anne’s advice “How wonderful it is that nobody need wait a single moment before starting to improve the world.”

How many have ever been to The Anne Frank House? How has her diary impacted you? Please share. the game, you don’t have to check the scoreboard, just look at everyone’s expressions. When you’re traveling you know you’re heading toward home when people on the plane are wearing Buckeye scarlet and gray garb. I am just as bad as everyone else.

The president of the university, Gordon Gee, has to be a bright man. He actually went to “Brown”, his old Alma Mater to become their president for a while. He must do his job well because they’re paying him millions of dollars to oversee “The Ohio State University.” How many people can make millions of dollars in a year?

His fashion sense isn’t great. He wears a bow tie constantly. That must say something about him. Is he a nonconformist, too lazy to tie a tie, or does he just want attention?

He does have a nasty habit of sticking his foot down his mouth. In December, he said something inappropriate about Catholics. This was directed against the Notre Dame football team. “The fathers are holy on Sunday, and they’re holy hell the rest of the week. You just can’t trust those damn Catholics on a Thursday or a Friday.”

This is supposed to be funny? I don’t find it the least bit amusing. The board is treating his like he’s 12, and requiring him to apologize. I don’t know who he’s going to apologize to? The Pope? They’re also making him attend some kind of class or lecture on how to be more tactful.

Maybe they should teach him about life in the 21st century. Maybe someone should inform him that bullying and making fun of groups of people is not socially appropriate. Maybe in 1945 that would go over, but not it 2013? What kind of role modeling is this behavior. Isn’t he a leader of a lot of students? It sounds a lot like something a bully might say!

This isn’t the first inappropriate thing he has said.

But he’ll stick around, and probably make another mistake in a few months.

The big shots in life just can get away with all kinds of things.